Hating on UKIP is the latest badge of righteousness, it seems. 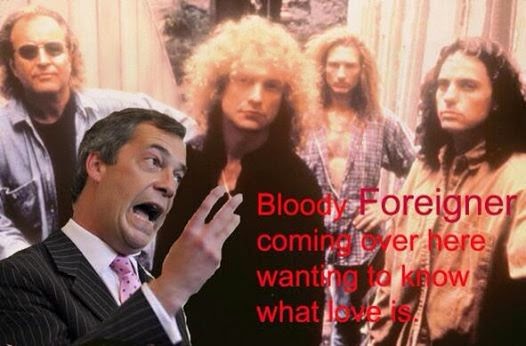 
It used to be the BNP that everyone competed to hate the most. It used to be the BNP that everyone feared the most. Back in 2009, when Nick Griffin, the BNP's then leader, was booked to appear on Question Time, some people were acting like it was going to be the end of the world if they didn't rush down to the studios and have a big tantrum outside. In fact, putting Griffin on national television was about the best thing that could possibly have been done. Because, in the run-up to his appearance, and for some time before, there had been a lot of hand-wringing and knicker-wetting about how incredibly dangerous Nick Griffin was, because he was such an acceptable face of nasty, dimwit fascism. How easy it would be for him and his gang of obnoxious little tossers to fool people with their presentable, 'caring' niceness. There was quite a bit in the media about the dangers of Nick Griffin's 'charm'.

And then there he was, on national telly. A sweaty, squirming, smirking, not-very-articulate weirdo talking a lot of old cock. The BNP pretty much bottomed out after that. Oh, they were still a kind of handy indicator of Nice Person-ness - you could express wild and passionate hatred and contempt for them if you were having a spot of social anxiety (after maybe making a tiny-bit-racist joke or something) and still impress people with the depth of your not-one-of-them-ness, but they had stopped being a major threat to the political infrastructure.

For a while, Nigel Farage seemed much more potentially dangerous. He could do charming, self-deprecating and funny. He managed to disown the first couple of his minions to come out with blatantly racist, sexist or homophobic crap. But the thing is with raging arseholes who actually have a nasty hidden agenda is that they can't keep the niceness up. Give them enough time and enough space and they will show their real faces. Just like the lovely, caring, romantic, spontaneous new lover who suddenly smashes up your phone or punches one of your friends for 'flirting' with you.

This is yet another reason why censorship is never the answer to anything. If people who are known or alleged to hold unacceptable opinions are banned from expressing those opinions, they become more dangerous because it's easy for them and their supporters to allege that their arguments are so convincing that they will cause a revolution. Letting them speak in public means they invariably trip over their own ringpieces and reveal themselves as the idiots they are - because their arguments are fundamentally invalid and they themselves are fundamentally inadequate.

But they do serve as a handy distraction from the dangerous, bigoted, looneytunes monsters we actually have elected at the moment...
Posted by Unknown at 16:51