It's not known, yet, how Jacintha Saldanha died. It's just really not very likely that she killed herself because she was tricked into Betraying The Future Queen. She may have died of natural causes, she may have taken her own life for reasons personal to her and nothing whatsoever to do with the Royal Pregnancy. But that hasn't stopped a worldwide frenzy of bucketheads pooing with rage and demanding PUNISHMENTS. Morons everywhere are insisting that a couple of daft DJs 'have her blood on their hands' and 'should be jailed'.

It doesn't take that big or ill-fitting a tinfoil hat to think that this is a press frenzy with purposes that have nothing to do with the unfortunate Saldanha. Firstly, you've got the assorted rich and powerful types embroiled in the Murdoch empire's phone-hacking business, who would all like the peasants to stop fussing about a little bit of corruption among their betters. Murdoch did his best to create a climate of fuckwitted, spiteful, unthinking sentimentality that could be channelled in whatever direction best suited the interests of him and his mates: such an environment demands a ready supply of both scapegoats and sacrificial victims. News International mixed the two categories up once too often and have been brought close to destruction by the machinery they created - the whole resevoir of slobbering outrage they created suddenly got unleashed on them when they were proven to have done harm to the individuals they built into talismans of 'innocence' and 'hope'. And now all of a sudden there's an opportunity to redirect all that not-very-clever emotional incontinence at someone else: two immature and thoughtless radio performers. They can be recast as symptoms of Everything That's Wrong, labelled as all-but-murderers. Everyone, go and hate them. If you don't hate them, you don't.... CARE.

Of course, it wouldn't have arisen at all if not for the idea that Kate Windsor being up the duff is something that matters. 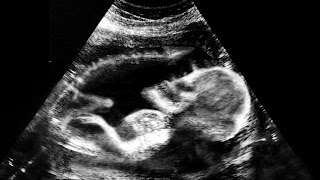 'pic originally from The Onion'

To most sensible people, it's about as important as hearing that your work colleague's cousin's mate is pregnant and suffering from a pregnancy-related illness. She's in hospital with hyperemesis gravidum? Oh dear, poor girl, that's nasty. Anyway, have you seen my stapler? But to the admittedly loose-ish consortion of The Powerful, that's not a useful attitude. People have to be made to understand that royalty, like celebrities, are important and must be worshipped, and that to laugh at them or take little notice of them is wrongful thinking. And now look, look! Some naughty peasants tried to take the mickey and SOMEONE'S DEAD BECAUSE OF INSUFFICIENT REVERENCE.

Poor Jacintha Saldanha. She was a person with a life and a narrative of her own. If her death actually was suicide, it would most likely have been for reasons that mattered to her: imminent bankruptcy, her marriage breaking up, having been diagnosed with a terminal illness... any number of things could have mattered to her a lot more than one particularly wealthy and well-connected patient at her workplace.  However she died, however important she was to her family and friends, she's now the Nurse Who Killed Herself Over Kate Windsor, and her death's been co-opted by the media and quite possibly the government as a symbol of the most imaginary evils of the modern world - satire and silliness.
Posted by Unknown at 14:05