Books and bums and badges and beer - Erotica revisited. 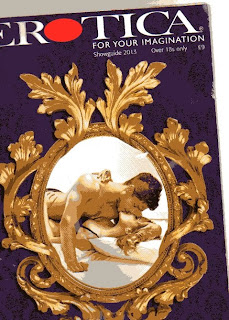 Well, the new venue's an improvement on Olympia in many ways. Tobacco Dock is a lovely steampunky setting full of corridors and little rooms, so the vibe was rather more of an upmarket shopping centre than a lairy great aircraft hanger. And the endless subdivisions of the showspace did make it a bit easier to stay unaffected by the sound from the live shows. In former years, the stage noise was the thing that the traders tended to hate the most: not just the volume but the repetition, as there were something like six shows a day for three days, and every show the same. I still can't hear the opening riff to You Can Leave Your Hat On without swearing to myself. 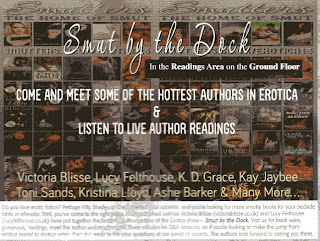 The stand, organised by the wonderful Smutters queens Lucy Felthouse and Victoria Blisse was a couple of tables in a corridor, but this actually worked to our collective advantage, especially on Saturday when we were mob-handed and we had an amp and a microphone. We got a lot of through traffic, even if a percentage of it only wanted to ask for diretions to the loo... I've said it before but it's worth saying again: erotic writers seem to be such a lovely bunch of people. There's a lot of mutual support and enthusiasm and friendliness - perhaps because we're still seen, to an extent, as a rather strange minority so it's extra-delightful just to hang out with our peers and not have to go through the usual 'No, I haven't really done everything I write about. No, actually, I don't want to do any hands-on research with you, mate.'
The visiting public were enthusiastic and friendly as well, with books shifting rapidly to the extent that Victoria and Lucy were probably going home with empty suitcases. As I don't currently have much that's in print form, I took a scaled-down version of the Decadent Media badge tray with me, and that seemed to appeal to punters as well. I've certainly come back from my two days in Tobacco Dock feeling revitalised and inspired and ready to write a lot more stuff, which makes a change from past events when I often came home knackered, hungover and with a head that just spun with the line 'better luck next year.'