Things that go Hump in the Night.

It's still, sort of, Samhaim season, at least as far as the pubs and clubs and tourist attractions are closed. I could probably digress a bit about the juggling the retail and entertainment industries have to do when a significant festival date like Halloween or Valentine's Day falls midweek - binge on it the weekend before, the weekend after, or both? 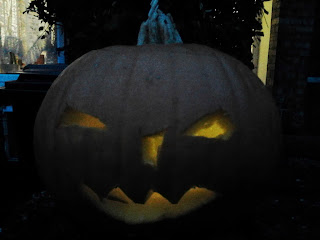 There were also a few zombie-shagging efforts, though I don't recall anyone doing an actual porn film about werewolves (I am prepared to be corrected if someone has superior knowledge). In book terms it's been even more of a successful combination. I discovered the Anita Blake novels in the late 90s and was very taken with the blend of spooks, mayhem and soft-core sex which, in the later ones, got progressively harder, but that didn't stop me being a bit gobsmacked some years later to find that WH Smiths had a whole section devoted to what they called Paranormal Romance and what we had previously called vampire smut. Werewolves featured fairly heavily in the novels, perhaps on the grounds that writing a book about shapeshifting is easier than spending an extra chunk of the budget on fake fur and a skilled make up artist - but I don't think I've so far discovered much in the way of zombie sex in fiction.
It's not a genre I've done much with myself so far, but I think there may be possibilities in the concept of an erotic poltergeist. Given the state of my boudoir, I think I might have already got one.