Doesn't matter what you wear, just as long as you are there: the LFF. 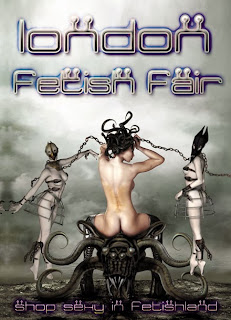 There's quite a busy buzz going round about this Sunday's London Fetish Fair, which is of course an excellent thing. It's moved to a new venue, which sounds terrific: the last one was very nice but simply too small for the event. As I rummaged around for the various components of the stock bags (everything having been vigorously redistributed round the office to get ready for Erotica the other week) I started reminiscing about the years I've spent standing behind a table piled with books and bits and pieces. A whole sixteen of them. Way back at the beginning, I was writing the Clubs column for Forum magazine, amongst other things, and used to sell, with the agreement of the then-publisher, copies of the current issue and any stray back issues we had around the office. Over the years, the stall which had generally been known as 'Zak's stall' or 'The Forum stall' turned into the Guild of Erotic Writers Stall selling Guild membership and copies of our anthologies along with printed slave contracts (a line of stock that always generated about ten times more press coverage than sales)  whatever I could liberate from the review cupboard into the early stages of Decadent Media, and now that's what it is today: a mix of books acquired from various sources, badges, stickers, fridge magnets and assorted bright ideas.

I've been with the LFF in a variety of locations: some nice and others less so. Moving around is no bad thing and sometimes necessary. Venues change hands and new owners either shriek with horror at the mere mention of sex and refuse to host, or operate a policy of not-so-benign neglect such as allowing the bar to run out of not just beer but any alcohol at all. Even when things went a bit wonky, as they occasionally did over the years, it's always been fun, it's always been interesting, and it's never been quite the same twice. And most of the time it's been marvellous. For at least the first four or five years of its existence, I used to recommend it both to new friends and in print as the best place to go if you were new to the whole fetish scene - you don't have to dress up, you are not going to be turned upside down and fucked up the bum the minute you step through the door (you'd have to wait till the afterparty and even then it would only get anywhere near happening if you asked very nicely) and the place is always full of friendly, cheerful and often very knowledgable people. I still would recommend it for the exact same reasons, but people these days are more able to look it up online for themselves.

So if you're new to the scene, or a full on fetish veteran, a player or a watcher, or just someone who fancies picking up something that will really blow heads off at the office party, stroll on down this Sunday.

I'll be the one behind the table of books and badges and stuff, and mine's a pint.