Sh! Oh and no shit Sherlock. 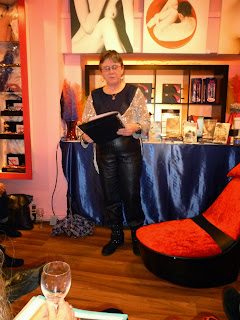 It's possible (or shall we say inevitable) that one of the reasons erotic writers tend to look out for one another, support each other and offer help unaided is that we know we're still a bit of a marginalized bunch, either ridiculed for our supposedly poor writing skills (yes, we know, because 50 Shades, but the existence of a lot of piss-awful crime novels doesn't stop the likes of Ian Rankin or Mo Hayder being good writers) or condemned as sickos who are a menace to society..
So the kerfuffel that's come up this weekend around Caitlin Moran and her oh-so-clever pisstake of fanfic writers was a bit interesting. The contrast between the generally dignified behaviour of the fanfic writer whose work Moran used without permission to take the general piss out of fanfic, and Moran's own behaviour in thinking it was a good idea in the first place is startling and infuriating. Quite a lot of 'successful' journalists are very quick to dismiss and belittle the work of independents, or amateurs, or people whose interests are not particularly mainstream. In some cases this is about reinforcing the well-paid writer and his/her readers' sense of their own normality. A big deal is made about 'objectivity' in journalism (which is, if you look at it closely, almost always a matter of writing from the viewpoint of a heterosexual white man with a reasonably good education, or as near as possible to those parameters). But sometimes it's a matter of reinforcing a hierarchy - the desirable are inside the gates, the 'outsiders' merit only derision, because otherwise they might start getting ideas above their station.
Still, the fact that Moran is getting her arse kicked round all four corners of the Internet might just teach her that holding someone up to ridicule and contempt just because you can is not great journalism or even crouw-pleasing entertainment, it's just playground spite.
Posted by Unknown at 15:18