You might well call it an interesting year, in a lot of ways. The  zombie apocalypse didn't happen, at least (sorry, have just got around to reading World War Z and am therefore quite glad) though we do seem to have more than our fair share of soulless, brainless, shambling undead in positions of power, which is not so good. 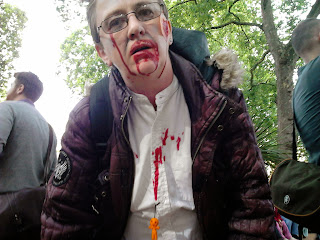 (that's me in zombie drag by the way)

In personal terms, well, I think I'll skip any boring on about repeated tedious (but not, ultimately, dangerous) health scares or the usual freelancer's struggle to get paid on time, or at all, in some cases. It's worth pausing for a moment to raise the Parting Glass to the unhappily high amount of friends who went back into the great atomic stream of the universe this year: Hazel, Velda, Nick, Bill, Clare, none forgotten.

Professionally, it's been what you might call a reawakening. After two or three years of really not writing very much and leaving fiction almost entirely alone I, like a few other people, got swept into the post-50-Shades excitement, and produced one novel, one novella and eight short stories. (Skim through previous posts for details of what and where and how to acquire your own copy). Yes, it looks a bit lame compared to the output of some of my new pals, but it's a start. 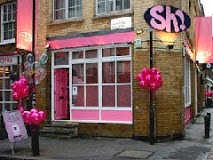 It does perhaps have to be mentioned, though, that this may be partly down to a shared need for support and encouragement given that not all the publishers in the field seem to be pulling their weight. Whether it's the shoulder-shrugging expectation that authors can bloody well do their own promo and, well, if it works that's nice but if it doesn't, whatever... - or the hassle it can be to get paid even when you're selling, it's unsurprising that there's a bit of a drift towards self-publishing. And perhaps even more unsurprising that self-publishing of erotica has been getting a bit of a kicking off the big boys and girls in the name of 'taste and decency'.

So I'm heading into 2014 with a degree of optimism. Censorship attempts from both the government and the big online booksellers have not, actually, gone down very well with the ebook-loving public, while live reading events have been attracting enthusiastic punters all over the place. And I have this massively good idea for a new book, as well...