Food and Sex and a Side of Misogyny.

When I was a nipper (well, a young teen) one of the Rules of my School was 'Girls wearing their uniform may not eat in the street, or on public transport.' Though we were solemnly informed by our form teachers that, actually, if your train journey home was longer than 20 minutes, you wouldn't actually be expelled for eating a biscuit or two. There's certainly a school of thought to the effect that eating in the street is at least proletarian, if not downright skanky. 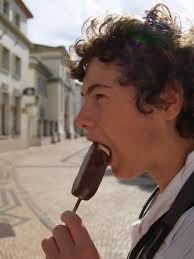 But an ice cream on a hot day is jolly nice, and it really won't wait until you get home.

Chowing down on public transport can be a touch antisocial, it's true. I did once have to get off a bus due to someone else's eyewateringly stinky supper, and the pervasive honk of chip fat on the trams at the end of the school day is not exactly lovable. Add in the way some people consume food - groaning, slobbering, chewing with their mouths open, tossing the debris over their shoulders and farting with appreciation - and you can see some justification for someone starting up a Facebook group to take the piss. 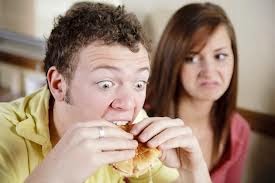 However, calling your Facebook group WOMEN Who Eat On Tubes does rather imply that you're bothered by more than the decline in modern dining etiquette, somehow. Centuries of misogyny 'culture and tradtion' have reinforced the message that women shouldn't eat too much, shouldn't enjoy their food, should never forget that being hungry is far less important than appearing attractive to men. Even now, British and American women are expected and encouraged to talk about food in a way that emphasises guilt and shame rather than pleasure, and it's treated as natural that women hate their own bodies, have to be told what to eat and, if they are not thin, they are fair game for anyone who wants to point this out to them. In domestic settings, it's always been accepted (and often still is) that men get given food first, get the most food and the best of the food. So for the smug cock who set up WWEOT to claim that it's all about 'human' behaviour is tiresome and dishonest. The W and the P are not next to each other on your keyboard, mate. You've set this group up to take the piss out of women, because you are, at heart, an immature tosspot who thinks 'Girls, eeew!' 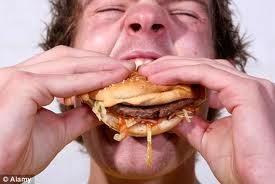 The writer Fiona Pitt-Kethley was quoted as saying she liked to eat bananas on the tube as a way of freaking out men, which strikes me as quite a good way of dealing with the whole issue, really. Anything phallic-shape can be tenderly sucked and licked and toyed with until you've got the attention of every loser in the carriage, at which point you bite it brutally in half...