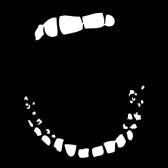 I know it's not really funny, and it must have fucking hurt. But when Wossname bit Thingy in that football match, it did acheive the almost unthinkable - it made me actually take a bit of notice of the World Cup. I even went as far as googling 'Bitey Footballer' so I could find out that the one with the sharp teeth is called Suarez and the poor sod with the teethmarks is called Ivanovic. Or Chellini. Or something. There are limits to my patience when it comes to researching stuff, but what I did find out is that Mr Bitey is Mr Bitey Bitey Bitey - he has previous for sinking fang into other players.

And at least one other someone has speculated about whether this is demonstration of a fetish. Well, OK, that's the point at which I actually get moderately interested, though I don't particularly think it is a fetish in his case, more of a nasty habit. Despite the deranged bullshit that was the Janus Report, most people know that most people with fetishes only enact them with consenting adults or the inanimate object of their choice and don't randomly leap at the unwilling in order to gratify themselves with no warning. Suarez probably bites because he's an overexcited, overpaid, overindulged brat in a fleeting high-pressure situation. End of. If he's particularly good at football, his employers should just put him in a muzzle for the next few games.

As fetishes go, biting's one of those that's both borderline mainstream and moderately risky. Lots of people who wouldn't call themselves kinky, exactly, get off on 'paranormal romance' ie vampire porn. The original Dracula novel certainly pulsates with subtle, euphemistic sexuality, and every teenager knows the illicit thrill of the lovebite (and the combined embarrassment and pride of the morning after and trying to decide whether to flaunt or conceal the unmistakable marks). At the same time, the human mouth is actually a great deal dirtier than you think, even if you floss, and a human bite which breaks the skin is likely to become miserably infected pretty quickly.

Oh, and this is not the start of the zombie apocalypse. He wasn't trying to eat the other bloke's brain.